Magic of the FA Cup!

Sutton United’s dream run in the FA cup continued on Sunday as they defeated the mighty Leeds United 1-0 at Gander Green Lane to progress through to the last 16 for the first time in the club’s history.

Jamie Collins’ second half penalty was the difference between the sides as Sutton, who currently sit 83 places below Leeds in the league, knocked out the Yorkshire side to join Lincoln City as the only other non-league side in tonights draw.

With premiership teams such as Chelsea, Manchester United and Manchester City still in the hat, Sutton will be hoping for an exciting tie in the next round, whilst many of the big names will now fear a trip to SM1. Whatever the draw, the Us will be cheered on by their fantastic fans who are now only two games away from walking down the famous Wembley way. 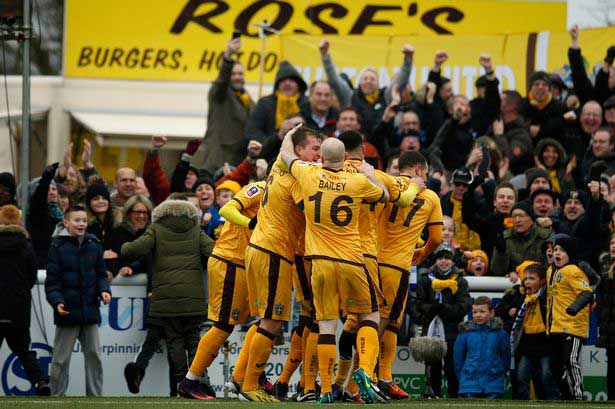 As well as continuing this historic cup run, the Amber and Chocolate side have showed that they are more than comfortable in the national league and held mid table rivals Eastleigh to a 1-1 draw a week earlier. Nigel Quinney, resident partner of our Sutton office and big Sutton United fan, had the honour of awarding Ross Worner with the Man of the Match award at the end of the game.