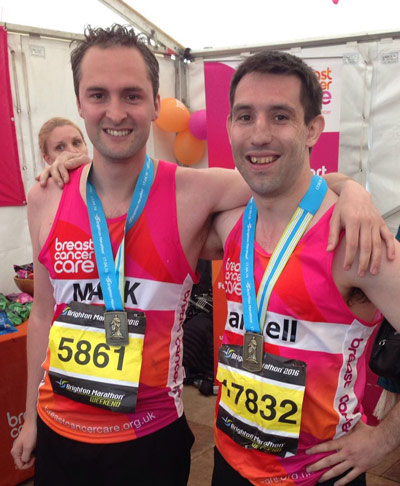 These were the words I uttered to the kind lady who handed me a medal and bottle of water at approximately 13.50 on Sunday 17 April 2016. Never again did I intend to put my body through the pain of the previous four and a bit hours and I could not have been more certain in my resolve as I limped away, wrapped in tin foil with the medal hanging around my neck. “I’ll see you next year then” she had replied.

I had just finished running the 2016 Brighton Marathon on behalf of Breast Cancer Care and was in no mood to consider repeating the feat. The race had represented the culmination of over three months’ hard training in which I had run in wind, rain, sun and snow; suffered blisters on my feet (plus injuries on even more sensitive parts of my body) and realised the wonders of both Vaseline and Compeed plasters.

It was in October 2015 when a friend and I decided (foolishly) that we should run the marathon. We had spoken about doing the London marathon for years but had never “gotten around” to applying and so when the opportunity arose to enter the Brighton event we decided it was about time we got on with it. We chose Breast Cancer Care as the charity to run for as it was a charity close to both of our hearts and began pestering friends, family members and colleagues for sponsorship. Training began in earnest at the turn of the year and we pounded the streets of Surrey and South London together on many a dark evening and on numerous Sunday mornings when our loved ones remained in bed.

Blisters to both my feet at the start of March left me unable to run again until after Easter and so by the time of the race, whilst I had put in extra work in the final weeks, I was apprehensive about finishing the course.

On the day of the marathon itself the weather was perfect (dry, sun shining but not too hot) and it was immediately obvious upon arriving in Brighton that the town had got caught up in marathon fever! The buzz at the train station and on the walk to the start was palpable and by the time Zoe Ball fired the starters gun my worries had dissipated and I was raring to go.

The route of the race was lined with spectators, many of whom had brought homemade signs with supportive slogans or were holding out jelly beans for the tired runners and I’m sure I can speak for the tens of thousands of participants when I say their support was greatly welcomed. Live bands played music at various stages of the race and the thousands of smiling faces and cheering voices along the course gave the day a real carnival feel.

In the end I finished the race in 4:38:10, just ahead of my friend although slightly slower than I had hoped for. More importantly  we had raised over £2,000.00 for Breast Cancer Care, a figure that far exceeded our own targets and expectations. Overall it was a wonderful day, a truly memorable experience and an achievement that I am very proud to say I have accomplished. In fact it was so enjoyable, maybe that lady was right. Where do I sign up for 2017?!

Steven Bannell is a solicitor in our property team and can be contacted at stevenbannell@whmatthews.com or on 0208 642 6677

You can visit his Just Giving page at https://www.justgiving.com/Steve-Bannell1